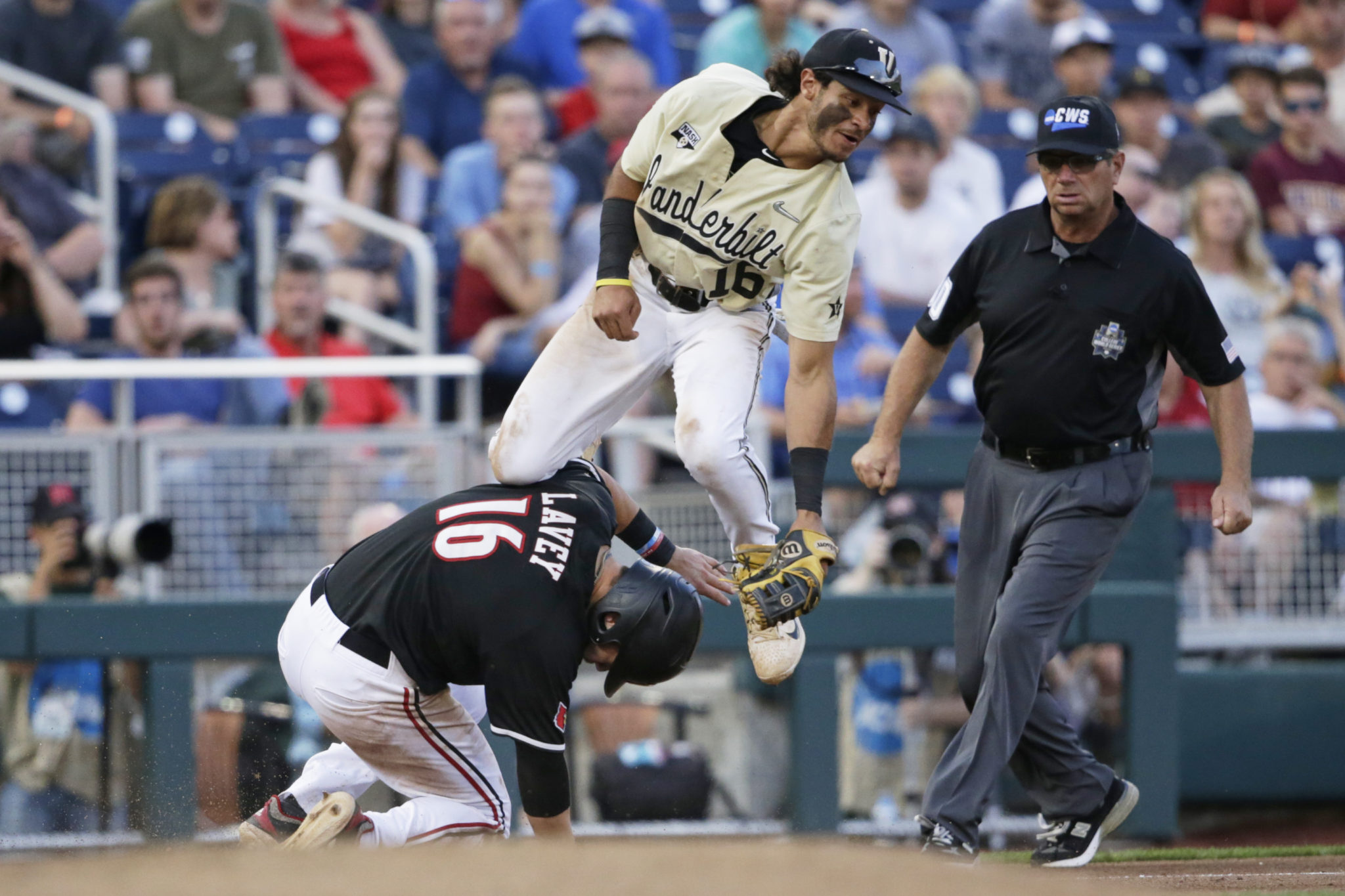 OMAHA, Neb. — Pat DeMarco chopped a grounder over third base in the ninth inning to give Vanderbilt its first lead and the Commodores beat Louisville 3-2 on Friday night to advance to the College World Series finals.

The No. 2 national seed Commodores (57-11) will play Michigan in the best-of-three finals starting Monday night. Vanderbilt last played in the finals in 2015.

Vandy’s potent offense had been all but stymied for 8 1/3 innings by Luke Smith. Louisville coach Dan McDonnell had closer Michael McAvene ready to go in the bullpen but left in Smith (6-1) after he walked JJ Bleday with one out. Ethan Paul ripped a double into the right-field corner to score Bleday and tie it at 2l.

McAvene came on, and Philip Clarke’s bloop single behind second base put runners on the corners with one out. DeMarco then hit a bouncer that went over third baseman Alex Binelas and landed just inside the line, bringing Paul in for the lead.

Louisville (51-18), which had a walk-off victory over Mississippi State on Thursday after erasing a 3-2 deficit in the ninth, had a chance against star closer Tyler Brown in the bottom half. Drew Campbell’s one-out grounder down the line bounced off the bag at first and put him into scoring position.

That’s as far as he got. Justin Lavey struck out, and second baseman Harrison Ray made a diving catch of Henry Davis’ short infield pop to end the game. Brown earned his 17th save.

Smith has been the Cards’ No. 4 starter this season, but he pitched like an ace in the NCAA Tournament. Friday was his first appearance since he threw three-hit ball over 8 1/3 innings against Illinois State on June 2 in regionals.

He struck out a career-high 10, the most in Louisville’s 14 games over five CWS appearances, and the only run scored against him before the ninth came on a double-play grounder.

A fired-up Smith struck out Julian Infante to end the eighth and chirped at him as he walked to the dugout, and then he came out for the ninth and retired .400 hitter Austin Martin before the bottom fell out.

Vandy starter Mason Hickman limited Louisville to two hits in six shutout innings. The Cards got something going against Jake Eder (2-0) in the seventh.

The Cards had a runner thrown out at the plate against a pulled-in infield but broke through after Davis’s two-out single put runners on first and second. Lavey stole third and scored when catcher Ty Duvall’s throw went into left field. Lucas Dunn followed with a grounder that glanced off Eder’s glove and deflected just out of shortstop Ethan Paul’s reach, allowing Davis to score and give Louisville the lead.

Vanderbilt beat Louisville in three meetings this season, including 3-1 last Sunday in the CWS.