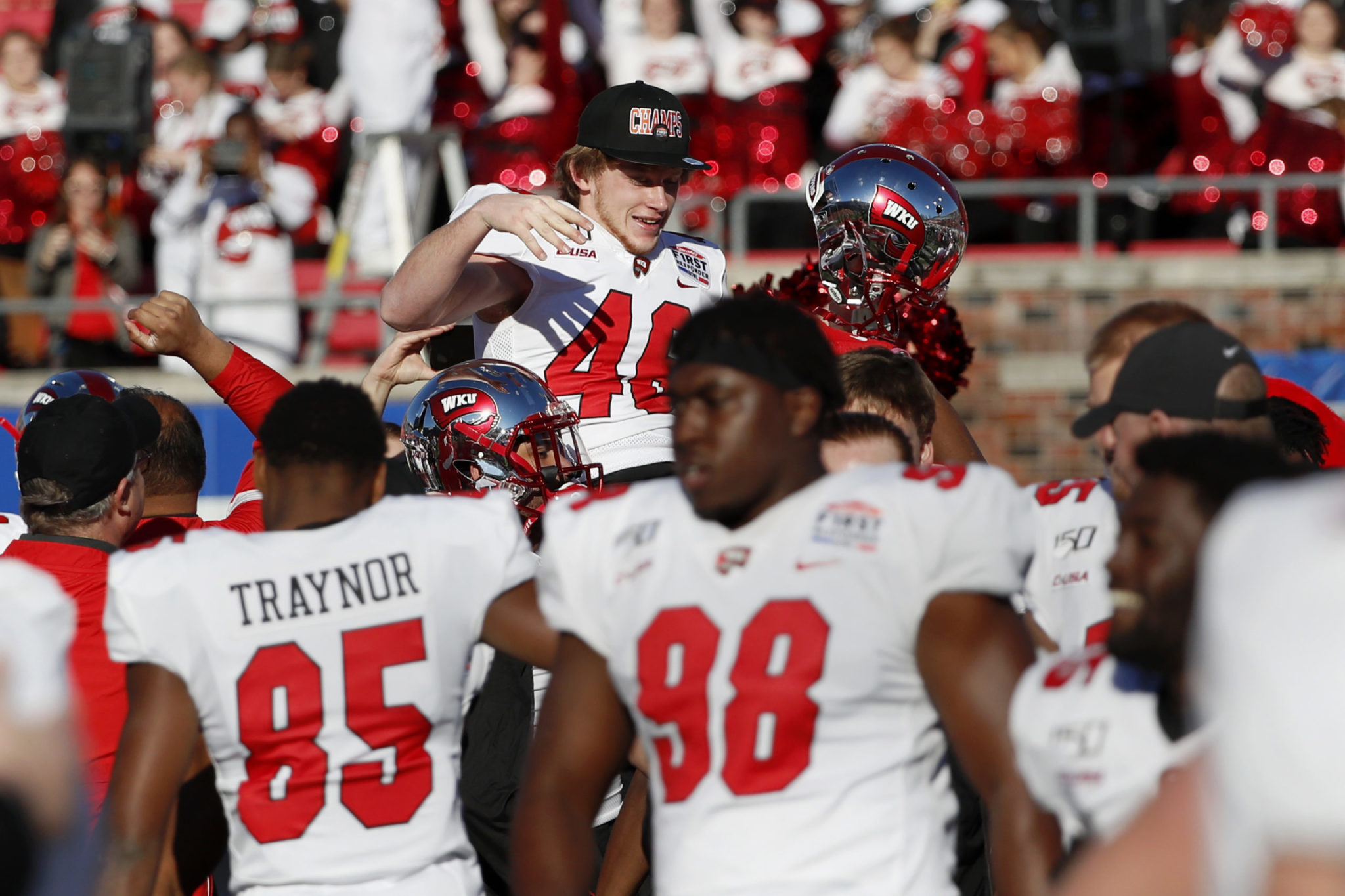 Freshman Cory Munson kicked a career-long 52-yard field goal with no time left after a rules review to give Western Kentucky a 23-20 victory over Western Michigan in the First Responder Bowl on Monday.

The Hilltoppers (9-4) drove 36 yards in 27 seconds before Munson kicked his third field goal in four tries. The game appeared headed to overtime when Ty Storey’s desperation heave was knocked down by the Broncos. But the Broncos were hit with a five-yard defensive substitution penalty and Munson was awarded an untimed down after a video review determined that Western Michigan had 12 players on the field as it switched between its field goal unit and regular defense.

“We knew we could make the kick when we saw they had 12 men on the field and might get penalized,” first-year Western Kentucky coach Tyson Helton said. “I wanted our true freshman Cory Munson to get a chance to kick it, and he did. It was a great kick.”

Kapps’ field goal, his second of the game, capped a 62-yard drive that took 5:35 after Western Kentucky had tied the score on a 15-yard touchdown pass from Ty Storey to Lucky Jackson with 10:40 to go. Jackson had 17 catches for 148 yards and was named the game’s most valuable player.

Western Michigan’s other touchdowns came on a 6-yard pass from Jon Wassink to DaShon Bussell midway through the third quarter and an 88-yard interception return by Kareem Ali in the first half’s closing minutes.

Storey threw a 17-yard pass to Jahcour Pearson in the second quarter for the Hilltoppers’ other touchdown on SMU’s campus.

Western Kentucky: The Hilltoppers will lose only two defensive starters from a unit that went into the bowl season ranked 21st in FBS scoring defense. With Storey leaving, Steven Duncan figures to return to No. 1 after starting this season’s first three games as a junior before injuring his left foot and missing the rest of the year.

Western Michigan: The Broncos will lose five starters each on offense and defense, including their three-year starter at quarterback (Wassink) and the Mid-American Conference players of the year on offense (RB LeVante Bellamy) and defense (LB Treshaun Hayward).

Western Kentucky: The Hilltoppers, who will open at home against Chattanooga on Sept. 5, will again play two Power Five programs (Louisville again and Indiana) next season. They play both defending Conference USA division winners on the road: Florida Atlantic and UAB.

Western Michigan: Next season the Broncos will return to Notre Dame, where they most recently played in 2010. Western Michigan will also welcome a Power Five team to Kalamazoo, Syracuse, a week after visiting South Bend.