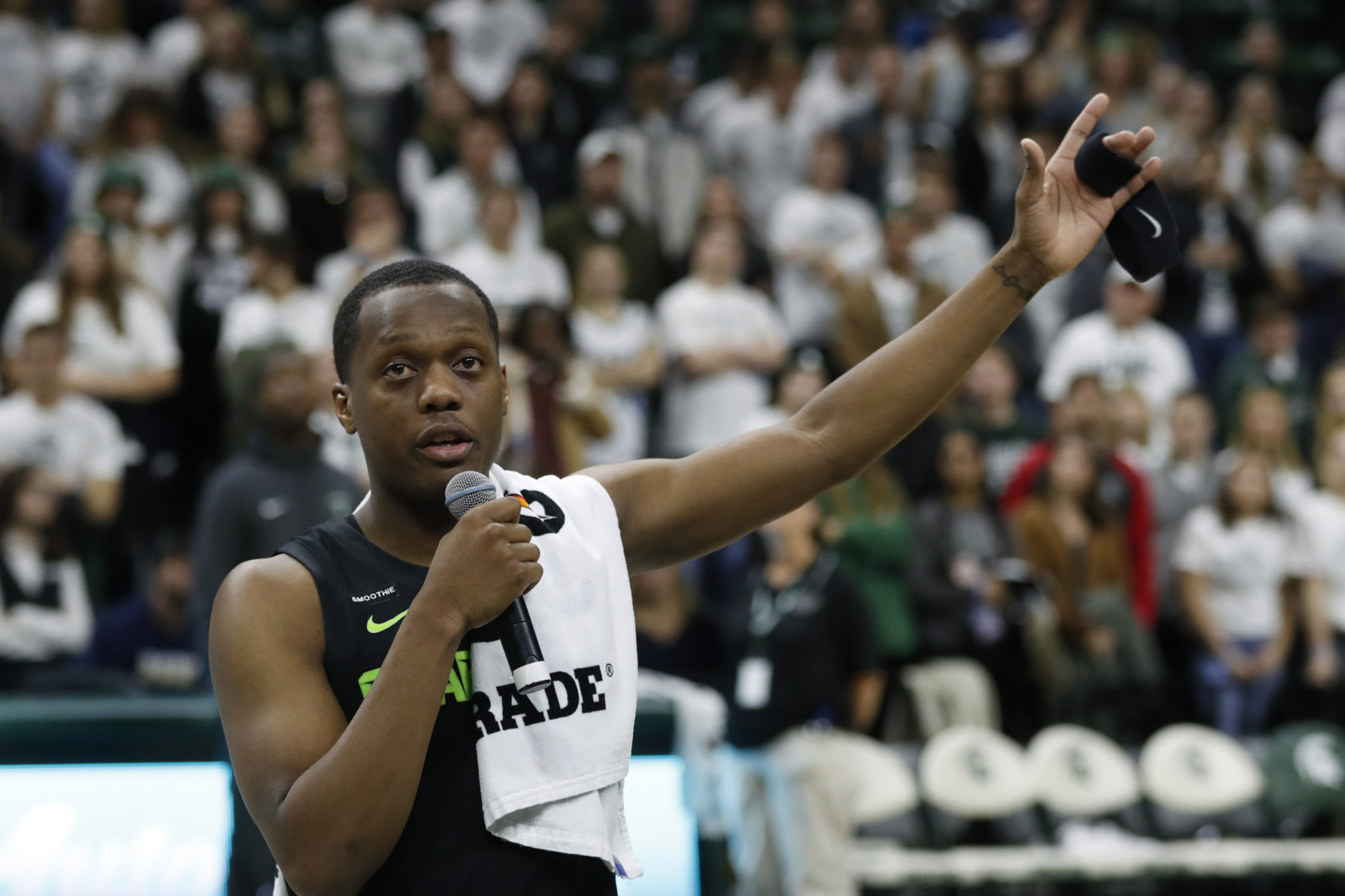 Cassius Winston made his first comments in public since the death of his brother, thanking Michigan State fans for their support.

Winston had 11 points and eight assists to help the third-ranked Spartans tune up with a 94-46 win over Charleston Southern on Monday night.

Michigan State coach Tom Izzo offered Winston an opportunity to address the Breslin Center crowd after the game because the senior guard has been appreciative of the cards, flowers and words of encouragement he has received from the community.

“I lost a piece of my heart, but you guys are keeping me going,” Winston told fans, who were asked to stay in their seats following the game. “I love everything about this place.”


Winston later said in the locker room it was important to him to speak directly to the crowd.

“Too many flowers and texts to even count,” he said. “People reaching out to you and praying for you.

“Their support is real.”

Winston played in his second home game and third this season since his younger brother, Zachary, died after being hit by an Amtrak train in Albion, where he played Division III basketball.

Izzo said it has been remarkable how Winston has handled his heartbreaking loss, but the All-America guard has not been able to practice much to stay sharp on the court.

“Cass did some good things and some great things,” Izzo said. “But trust me when I say he wasn’t himself.”

Xavier Tillman scored a career-high 21 points and grabbed 10 rebounds for the Spartans (3-1) in an on-campus game that is part of the Maui Invitational.

Michigan State was without starting forward Aaron Henry, who rolled both ankles in last week’s win over then-No. 12 Seton Hall.

The Buccaneers (1-4) have had four straight lopsided losses since opening with a win over Columbia International. They’re in the middle of a four-game stretch over nine days, all away from home.


“We’ll fight our way through the tough early schedule like we always do,” coach Barclay Radebaugh said.

The Buccaneers scored first and led for 15 seconds before the Spartans took over. Michigan State led 31-9 midway through the first half before taking a 40-18 lead at halftime.

The Spartans did not let up in the second half, building a 40-plus point lead to help prepare for tougher competition next week in Hawaii at the Maui Invitational.

“The ability they have in transition is the best I’ve seen in a lot of years,” Radebaugh said. “I haven’t seen a team run like that since the old Arkansas teams.”

Charleston Southern: The Big South team took the game to make some money and gain experience against one of the top teams in the country to prepare for its quest to make the NCAA Tournament by winning its conference tournament.

Michigan State: Henry’s injury is potentially problematic for a team already without Langford, who is out until at least January with a foot injury.

Henry insisted he should be fine for next week’s games.

Charleston Southern: Faces Southern Utah on Saturday in a neutral-site game in Tennessee.

Michigan State: Plays Virginia Tech on Monday in the Maui Invitational, where the Spartans will play Dayton or Georgia and potentially No. 4 Kansas.